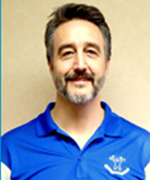 Michael was born and raised in the Lewis-Clark Valley. He completed his pre-physical therapy education at Washington State University. He received his physical therapy degree in 1984 at the University of Washington. After graduation he worked as a staff therapist at Latah Care Center in Moscow, Idaho until he moved to San Antonio, Texas. While in San Antonio he had the opportunity to work and study under his mentor in manual therapy, Dr. Steven Stratton at Alamo Physical Therapy. Three years after moving back to Lewiston he joined Bill Neumayer, founder of S.P.O.R.T. Physical Therapy, as a partner in 1992. Michael’s clinical experience and expertise; as well as, his postgraduate studies have centered in general orthopedics, low back and neck care, manual therapy, sports medicine, hand therapy and TMJ. In addition, he has developed and integrated on-site strategies and directives for industrial injury prevention.

In 2003 Michael obtained his Isernhagen Certification for performing FCE’s. He obtained his Board Certification as an Orthopedic Specialist in 2014. His been a member of the American Physical Therapy Association (APTA) since 1984 and has served as the chairman of the North-Central Idaho District Physical Therapy Association. He is also active in his community and has served on the Boys and Girls Club Board of Directors, and is presently serving on the leadership board at River City Church of Lewiston, Idaho.

His interests and passions involve his faith in Jesus, family and friends. He loves spending time with his wife Debbie and their four children Jeff, Jacque, Stephen, Connor and his seven grandchildren. He enjoys time in the outdoors camping, hunting, fly fishing, wake surfing and snow skiing.