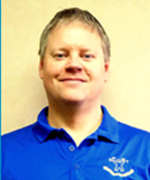 Kelly Steiger was born & raised in Lewiston, ID where he graduated from Lewis-Clark State College. He then graduated from Eastern Washington State University School of Physical Therapy in 1993. Kelly joined the staff at S.P.O.R.T. Physical Therapy in 1994 & became a partner in 2007. In 2003, Kelly obtained Isernhagen Certification for performing Functional Capacity Evaluations. He was Certified in Strength & Conditioning in 2005 & received his Board Certification in Orthopaedics in 2007. In 2010, Kelly passed the Sports Specialty (SCS) exam, & is now board certified in that designation.